You are using an outdated browser. Please upgrade your browser to improve your experience.
by Brent Dirks
May 11, 2012
It looks like the built-in Maps app will be getting a much needed upgrade when iOS 6 is introduced at WWDC in June. According to 9to5Mac, Apple is planning on dropping the Google Maps backend that has supported the mapping function since the iPhone was introduced in 2007. In its place will be an in-house map app that is fairly similar but a "much cleaner, faster, and more reliable experience." In the previous versions of the app, Apple had full control of the application design, but the actual data came from Google. But with the acquisitions of Placebase, C3 Technologies, and Poly9, Apple will be able to host the map backend itself. And the most exciting part of the new app will apparently be the replacement for the always-handy Google Street View. A new, powerful 3-D mode has been designed by C3 Technologies. The mode won't be enabled by default, but will offer "beautiful, realistic graphics based on de-classified missile target algorithms," according to the report. Pictured (on the right) is a rough mock-up of the new mode. Even better, here's a quick video of what C3 Technologies' maps look like. Click here if you can't see the video. If it's half a nice as that video, it should be a welcome change for iOS users. Along with the information about the new mapping program, the report did have one more nugget of information about any massive UI or homescreen changes. In short, don't be looking for anything major. But hopefully there will be some other nice surprises. 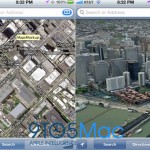 Apple To Drop Google, Provide Own Map Data In iOS 6

Apple To Drop Google, Provide Own Map Data In iOS 6
Nothing found :(
Try something else