You are using an outdated browser. Please upgrade your browser to improve your experience.
by Joe White
May 25, 2012
Today could be the day @pod2g releases his untethered jailbreak solution for iOS 5.1(.1). It's been months in the making - and we've been updating you every step of the way. However, according to a recent Twitter update from @HITBSecConf (Hack In The Box 2012: the security conference at which @pod2g, @MuscleNerd and the Chronic Dev Team are invited speakers), it would appear that today could be the day the long-awaited iOS 5.1-jailbreak hits the Web - making Friday "Funday" (#FridayisFunday), popular day in the jailbreak calendar. Here's the aforementioned Twitter update:

If you check the HITB schedule, the famed jailbreakers mentioned in the tweet are indeed giving their presentations between the hours of 11:30 a.m. and 2:30 p.m. (CEST), suggesting, as iDownloadBlog notes, that we might see the release of the iOS 5.1-jailbreak between these hours, or perhaps shortly after:

This means the Corona event will start at 5:30AM EST on Friday, May 25th, and the Absinthe event will follow shortly thereafter at 7:00 AM EST. It’s very possible that the jailbreak will be released sometime within that ballpark window.

There isn't long to go! If anything does happen we'll of course let you know, so be sure to check back with us. Source: @HITBSecConf Via: iDownloadBlog Image: Macsorro, @Macsorro 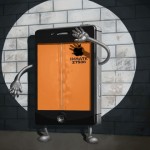 Could Pod2g Unleash His Long-Awaited Jailbreak Solution Today At Hack In The Box Conference?

Could Pod2g Unleash His Long-Awaited Jailbreak Solution Today At Hack In The Box Conference?
Nothing found :(
Try something else