You are using an outdated browser. Please upgrade your browser to improve your experience.
by Tommy Ly
May 23, 2012
Drafts has just received a significant update. It isn't quite a version 2.0, but version 1.2 of Drafts brings some great new features to an already solid app. If you haven't heard of Drafts, it's a great way to quickly get your thoughts down on paper. Well, not paper, but you know what I mean. You can read our original review here. Upon launching Drafts, you can immediately start typing. Once your drafts are good to go, there are a myriad of output options available, including sending to OmniFocus, Things, The Hit List, Byword, and Sparrow, just to name a few. So, what does Drafts v1.2 bring to the table? The changes are plentiful, but some of the biggest changes to Drafts are its new output options, which include Facebook and Evernote. Also, there's a new "Event" action, which you can use to create iOS calendar events based on your drafts. Perhaps the best new feature is the "Confirm Before Running" setting on each action. When enabled, you'll have the option to confirm or cancel actions before they are executed. This is especially handy to prevent accidental posts to Twitter, Facebook, or any other supported apps. For a complete list of changes in Drafts v1.2 ($0.99), check it out in the App Store. 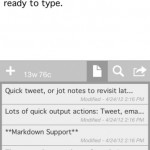 Drafts v1.2 Brings New Sharing Options And More
Nothing found :(
Try something else