You are using an outdated browser. Please upgrade your browser to improve your experience.
by Aldrin Calimlim
May 21, 2012
As if you needed further proof of the imminent, or rather ongoing, iOSification of Mac OS X, 9to5Mac has posted a scoop about the presence of iOS-inspired automatic app downloads in the latest developer preview of OS X Mountain Lion. As shown in the screenshot above, the preview of the next major release of OS X includes a prompt for the authorization of automatic app downloads. Enabling this feature will presumably instigate the automatic downloading of apps purchased on one Mac onto other Macs that share the same App Store account. Understandably for something included in a pre-release build, the feature doesn't seem to be working properly. Early trials result in the App Store displaying apps purchased in another Mac as installed even when the apps aren't actually downloaded, automatically or otherwise, onto the Mac on hand. Most users of iOS devices are doubtless familiar with the original implementation of this feature. A similar prompt appears at some point on iOS devices logged in to an App Store account. An affirmative response to this prompt allows for the automatic downloading of apps, as well as of purchased music and books, across all iOS devices associated with the same App Store account. Alternatively, this feature can be toggled individually for apps, music, and books in the Store section of the Settings app, as shown below. You can see automatic downloads on iOS in action in Apple's iCloud Harmony TV ad. Are you looking forward to encountering more instances of iOS-like behavior, such as automatic downloads, in OS X Mountain Lion? Source: 9to5Mac Main image: 9to5Mac 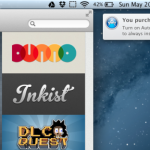