You are using an outdated browser. Please upgrade your browser to improve your experience.
by Aldrin Calimlim
May 11, 2012
Gesundheit! That's what you'll probably be repeatedly saying out loud or in your mind as you play the award-winning puzzler Gesundheit! In this game from Konami, you control a green piggy (no, not that kind of green piggy) as he tries to trap the monsters that have invaded his village. And guess what he uses to lure the enemies to their undoing. Snot. Green, sticky, freshly sneezed snot. Gross? Not really. The game is actually quite gorgeous, with its hand-drawn graphics and cinematic animations. And guess what again. Gesundeit! HD, the game's iPad version, just got a major update that makes the game look even more gorgeous on the new iPad's Retina display. Great? Absolutely. The update, which is the game's first major version-up since its launch in July last year, also introduces a few other enhancements aside from the well-suited Retina iPad graphics upgrade. Far from being allergic to new stuff, Gesundheit! HD has earned a new cut scene and a new free bonus map with six new levels and challenges. Twitter and Facebook integration and iCloud cross-device progress syncing are also included in the package. Finally, the game's controls, whose intermittent unresponsiveness has long been a common gripe among players, have been improved. Gesundheit! HD for iPad is available in the App Store for $2.99. The standard Gesundheit! for iPhone is also available for a dollar less. I highly recommend getting the HD version if only for its superb appearance on the new iPad's Retina display. Besides, sneezing up that extra dollar for a lot of extra pixels shouldn't be so hard, right? 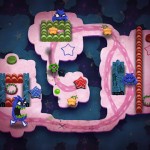 Gesundheit! HD Sneezes Out First Major Update Including Retina iPad Support
Nothing found :(
Try something else