You are using an outdated browser. Please upgrade your browser to improve your experience.
by Joe White
May 14, 2012
There have been battery life Notification Center widgets in the past, some of which looked rather good - such as the simplistic BatteryCenter, or the rather complex PowerCenter Pro. Now, one new jailbreak tweak combines the appealing appearance of the former with the detailed information provided by the latter: it's called BatteryInfo for Notification Center, and the tweak is currently available in the Cydia Store for $0.99. As Redmond Pie notes, features of the Notification Center widget include: The website adds:

The widget also contains two visual indicator bars. The first bar increases or deceases based on the battery percentage while the second is representation of the current capacity over the original design capacity. One of the great things about the tweak is that it actually allows you to see how much the battery has degraded since purchase.

Additionally, it's possible to have BatteryInfo for Notification Center display on users' Home screen, thanks to its flawless compatibility with Dashboard X - a clever jailbreak tweak we told you about recently. As mentioned, BatteryInfo for Notification Center is currently available in the Cydia Store for $0.99, via the BigBoss repository (Dashboard X can be yours for $1.99 - it's hosted by ModMyi). Take a look at both tweaks, and if you have any thoughts, feel free to share them in the comments below. 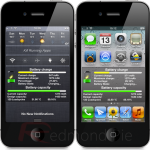 Jailbreak Only: BatteryInfo For Notification Center - A Great New NC Widget
Nothing found :(
Try something else