You are using an outdated browser. Please upgrade your browser to improve your experience.
by Brent Dirks
May 22, 2012
It looks like more than one next-generation iOS device will be getting a makeover. According to MacRumors, a source has provided the site with images of what purportedly is the front panel from the new iPod touch. And the supplier is claiming the screen panel measures in at 4.1 inches diagonally. That directly contradicts information we reported on this morning saying Apple is testing two new iPhone prototypes with 3.95-inch screens. So unless Apple is planning on producing two different displays sizes, which is enormously unlikely, it looks like the screen size hasn’t been set in stone just yet. The Wall Street Journal and Reuters reported last week that the size will be “at least 4 inches diagonally.” Along with the iPod touch screen, MacRumors was also sent part photos claimed to be from the next iPhone. Pictures of the home button flex cable and front/rear cameras do show apparent differences from the current iPhone 4S configuration. The rear camera, even though similar to previous editions, is lacking the LED flash module. Today’s information isn’t the first apparent parts leak from the new iPhone. In late April, a Chinese supplier offered photos of “iPhone 5 home buttons” that look somewhat different than the iPhone 4/4S. Despite some early rumors to the contrary, it looks like the new iPhone will be announced sometime this fall. At this point, though, it looks like a bigger screen is almost a certainty. Source: MacRumors 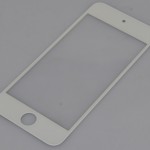