You are using an outdated browser. Please upgrade your browser to improve your experience.
by Bryan M. Wolfe
May 3, 2012
The iPhone rumor mill is heating up again. Today’s speculation comes from iLounge, which believes Apple’s next handset will be thinner and longer than the iPhone 4S/4, and for the first time, include a new aspect radio. Citing an unnamed source, the site says the sixth generation iPhone will have approximate measurements of 125mm by 58.5mm by 7.4mm. This would mean a 10mm jump in height, nearly 2mm reduction in thickness, and a near identical width versus the iPhone 4S/4 models. In addition, Apple will make a slight change to the rear casing adding a metal panel to the central back of the iPhone. More significantly, the next handset will include a 4 inch screen. This means, “Apple will change the new iPhone’s aspect ratio for the first time since the original iPhone was introduced in 2007, adding additional pixels to the top and bottom of the screen.” Finally, iLounge believes the next iPhone’s Dock Connector will have fewer pins. Instead of 30, it will include 16. While we applaud iLounge’s designs, we’re pretty sure their sources are wrong. For one, Apple would never change the iPhone's aspect ratio. For another, if a thinner iPhone means poorer battery life, we say no. However, iLounge has been correct about some rumors in the past. For instance, their claims about what was to become the new iPad were somewhat correct. As a reminder, the sixth generation iPhone is expected to launch sometime this year. For your latest fix of iPhone rumors, visit AppAdvice each day! What do you think of iLounge's new iPhone design? 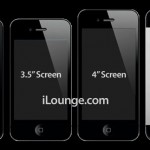 Rumor: Apple About To Break Traditional iPhone Design
Nothing found :(
Try something else