You are using an outdated browser. Please upgrade your browser to improve your experience.
by Tommy Ly
May 13, 2012
If you haven't heard the news, Ashton Kutcher (yeah, THAT Ashton Kutcher) is set to portray the late Steve Jobs in an upcoming biopic that's set to start filming this month. The film will chronicle the life of Jobs from 1971 to 2000, according to an interview with producer Mark Hulme by Neowin. I'm sure I'm not alone here, but I was extremely skeptical after learning of Kutcher's role in the film. That skepticism has grown thanks to these new photos from TMZ. In most public appearances since the mid to late 90s, Jobs wore his trademark outfit: black turtleneck, blue jeans, and New Balance sneakers. Jobs definitely had much less hair on his head and face when he started dressing like the Jobs we remember, so I'm not sure why Kutcher is in this getup if he's portraying a much younger Jobs. Honestly, I don't have very high expectations for this film. I feel like Kutcher was cast based solely on his resemblance to a young Steve Jobs. While I don't think Kutcher is necessarily a bad actor, I don't think he's the right choice for Jobs, but I guess we'll have to wait and see. What do you think about the photographs of "iKutcher?" He certainly looks the part, but do you think that will be enough? 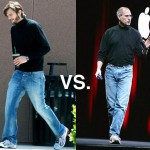 The First Images of 'iKutcher' Appear Online
Nothing found :(
Try something else