You are using an outdated browser. Please upgrade your browser to improve your experience.
by Bryan M. Wolfe
May 30, 2012
One of the more interesting topics Tim Cook discussed at D10 was his belief that more of Apple’s manufacturing could eventually be done in the United States. The CEO also defended his company against attacks from many over Apple’s use of low-cost Asian manufacturers, according to The Star. Calling it difficult to manufacture in the U.S. because of declining tool-and-die expertise, the Apple CEO nonetheless felt more work could be done in Apple’s home country. Cook stated:

To make his point, the Apple CEO, who took the helm of the world’s most valuable technology company in August, said that some future assembly could move from China to the U.S. Additionally, future Apple products might include more U.S. components such as semiconductors. Currently, Apple’s final assembly for key products such as the iPhone/iPod touch and iPad are done through Asian contract manufacturers, including Taiwan’s Foxconn Technology Group. However, Apple does make the A5 processor at a factory in Austin, Texas owned by Samsung Electronics. Cook also noted that the glass for the iPhone and iPad are made in a plant in Kentucky.

Of course, whenever talk focuses on moving manufacturing to the U.S. one has to wonder what that would mean not only to Apple’s bottom line, but also to the cost the company would charge consumers for their products. Many of us cringe each time we hear another story about poor working conditions at plants in China. However, those conditions allow Apple, and other U.S. companies, to offer products at less expensive prices. Whether consumers would be comfortable with paying a higher price to satisfy their next iDevice fix remains to be seen. Would you willing to pay more for Apple products if they were actually manufactured in the U.S.? How much more, for example, would you pay for an iPad? Source: The Star 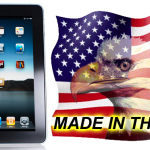 Tim Cook Suggests Future Products Could Be Made Stateside

Tim Cook Suggests Future Products Could Be Made Stateside
Nothing found :(
Try something else