You are using an outdated browser. Please upgrade your browser to improve your experience.
by Brent Dirks
May 30, 2012
In a wide-ranging interview, Apple CEO Tim Cook discussed Steve Jobs, Siri, patent wars, China manufacturing, and more during D10 Tuesday night. For Cook's first conversation at the conference, held this year in Ranchos Palos Verdes, Calif., he discussed everything from the iPad to China manufacturing with Walt Mossberg and Kara Swisher. Near the beginning of the interview, Cook discussed what he learned from the late Steve Jobs and how he is different as Apple's CEO.

"I learned a lot from Steve. It was absolutely one of the saddest days of my life when he passed away. As much as you should see something like that coming, I couldn't. Last year, someone shook me and said 'It's time to get on.' So that's where it's at today. What did I learn from him? We could be here all month.... I learned that focus is key; not just in running a company, but in your personal life. You can only do so much great, and the rest you should cast aside."

During the Q-and-A portion of the event, Cook also talked about how Jobs convinced him to join the company. Five minutes into a conversation with Jobs, Cook said he wanted to join Apple. Cook also discussed some of the uproar regarding Apple's manufacturing facilities in China. Apple is working to track more than 700,000 workers and reduce overtime at the Foxconn facilities. Noting that parts of iOS devices – including the semiconductors and glass screen - are made in the United States, Cook said he would eventually like to see the assembly piece of the puzzle take place in the United States.

"There are things we can do and that's what we are working on. We should do more semiconductor things in the U.S."

Mossberg and Swisher were able to get Cook to open up on how Apple would hypothetically make a television.

"Here's the way we'd look at that. Not just at this area, but other areas. 'Can we control the key technology? Can we make a significant contribution beyond what others have done in this area? Will this product be one that we want?' That's what we'd ask about any new product category. That's what we ask about products within families that we've already announced."

Cook, also discussing the television area, did offer some promise of a future Apple product.

"We are going to keep pulling the string and see where this takes us."

While not getting into specifics, Cook did say that people will like what will be introduced at WWDC 2012 in San Francisco. One area alluded to was Siri, the often-derided personal assistant that debuted with the iPhone 4S.

"Customers love it. But, there's more that it can do, and... we have a lot of people working on this. I think you'll be really pleased with what you see in the coming months on this. We've got some cool ideas about what Siri can do. We have a lot going on on this." 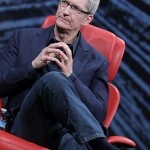