You are using an outdated browser. Please upgrade your browser to improve your experience.
by Joe White
May 8, 2012
Not long after Apple released iOS 5.1.1, the jailbreak "celeb" Stefan Essar, known also as @i0n1c, managed to jailbreak the new operating system on the third-generation iPad, and tweeted out a picture of his jailbroken iPad to prove it.

But don't get too excited. While @i0n1c has certainly managed to jailbreak the new iPad (under iOS 5.1, and now iOS 5.1.1), jailbreak fans must instead look towards @pod2g - who's working on developing a jailbreak solution for the iPhone 4S, new iPad and more - for the release of an all-new jailbreak and, with any luck, we'll be able to "liberate" our A5X-powered iOS devices under iOS 5.1.1 in the near future. As always, we'll keep you posted. (via iDownloadBlog) 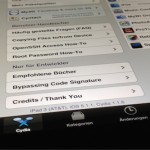 Yeah, The New iPad Can Be Jailbroken Under iOS 5.1.1

Yeah, The New iPad Can Be Jailbroken Under iOS 5.1.1
Nothing found :(
Try something else