You are using an outdated browser. Please upgrade your browser to improve your experience.
by Tommy Ly
June 11, 2012
Amidst the chaos of WWDC and flurry of new MacBooks and iOS features, a few things crept past the public eye. Aside from updated accessories and slight spec upgrades, Apple's keynote also failed to (directly) mention the visual changes to the iTunes Store, iBookstore, and App Store, according to The Verge. The changes could be attributed to iOS 6's Facebook integration, which allows you to "like" music, apps, movies, and more. In addition, you can see what your Facebook friends like as well, which should make finding new apps and music much easier. The Verge had this to say regarding the changes to Apple's digital stores:

The stores have also gotten a little graphic facelift, with a larger Cover Flow style banner at the top for the iPad and edge-to-edge images on the iPhone. And despite the new Facebook integration, it looks like Ping will surprisingly live on — in Apple's press image, there's a tiny Ping icon in the iPad's store dock. There's not much else to go on for now, but we'll surely see more of Apple's redesigned storefronts in the coming months.

Of course, we won't know until iOS 6 makes its way to us this fall. Until then, we can hope to see some more of iOS 6's features come to light as developers were granted access to the iOS 6 beta earlier today. The folks at 9to5Mac have posted some screenshots from an iPhone running the iOS 6 beta, and as you can see, the stores do have a new design. Of course, the final design may be tweaked or removed altogether before the final version of iOS 6 is made public. Personally, I think any type of aesthetic change to the App Store will be better than the jumbled mess it is now. How about you? Source: The Verge, 9to5Mac 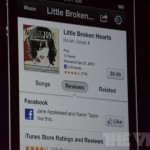 Are Apple's Digital Stores Getting Facelifts For iOS 6?

Are Apple's Digital Stores Getting Facelifts For iOS 6?
Nothing found :(
Try something else