You are using an outdated browser. Please upgrade your browser to improve your experience.
by Lenny Liang
June 11, 2012
At WWDC 2011, Apple announced iOS 5, complete with Twitter integration. Today, at WWDC 2012, Apple announced iOS 6, complete with Facebook integration. There is a fitting symmetry between the iOS integrations of the two social media powerhouses. Similar to its Twitter integration, the new integration with Facebook will allow iOS users to log in from Settings and share from Camera, Photos, or Safari, complete with status messages. There's an API, so Facebook functionality can be added to apps. Facebook, along with Twitter, will now be built directly into Notification Center; you just need one tap to post. Siri will also be able to post for you. Along with Notification Center, Facebook is also being integrated into the App Store, iTunes Store, Maps, and Game Center, as well as your Contacts list. You can post your location from wherever you are. You can "like" apps, music, movies, and more, as well as see what your friends like. Your Facebook events, such as birthdays, will also appear in your calendars. And that's just the icing on the cake. Today's announcement introduced a deep integration with Facebook, which should be a game changer for both Apple and Facebook. Twitter experienced significant growth with its iOS integration. Facebook looks to achieve similar success. It's been a big year for Facebook. It went public, acquired Instagram, and launched its own App Center. With this integration with iOS, Facebook's year gets even bigger. 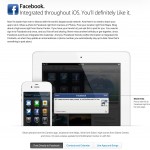 Facebook Gets Integrated Into iOS 6
Nothing found :(
Try something else