You are using an outdated browser. Please upgrade your browser to improve your experience.
by Brent Dirks
June 7, 2012
On the second anniversary of popular Camera+ hitting the App Store, developer Tap tap tap announced it has sold the 8 millionth copy of the app. In an official blog post, founder John Casasanta reflected on the past two years. Most importantly, he said there are now 17 developers working on the app and that an update is coming soon.

I'm not going to spoil the surprise but I'll just say that the next major release of Camera+ has been in the works for a very long time and it's going to make many of you very happy.

Casasanta also talked about the company’s wish to stay independent. The developer has turned down offers to be acquired from Zynga, Adobe, Google, and most recently Twitter.

We greatly value our independence and in all cases, we've fended the suitors off and chosen to remain independent. Fiercely independent. We have a ton of things we want to accomplish here and working for some conglomerate or having bean-counting investors breathing down our necks simply isn't the way for us to achieve them. The proposed Facebook acquisition of Instagram fueled a lot of ridiculousness in the industry and the number of zeroes that've come-up in these negotiations has been insane. These offers have been tempting… extremely tempting in some particular cases. Now I know how that old-timey chap felt with the snake and the apple or whatever.

Camera+ is pretty much my all-time favorite camera app for my iPhone, and I’m pleased to see it do so well since its release. Hopefully the company will stay the course and remain independent while focusing on the best experience for its customers. Camera+ can be purchased in the App Store for $0.99. 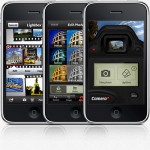 Camera+ Sells Eight Millionth Copy On Second Anniversary
Nothing found :(
Try something else