You are using an outdated browser. Please upgrade your browser to improve your experience.
by Joe White
June 16, 2012
Apple has added push notification-support for Government alerts ("AMBER Alerts" and "Emergency Alerts") in iOS 6, according to CNET. As you can see in the above image, two new toggles - one for "AMBER Alerts," and another for "Emergency Alerts" - have appeared in the "Notifications" section of the built-in Settings app in iOS 6. Users have the option of enabling what we presume to be push notifications for these two alert-types, meaning that in the event of an emergency, users would receive a notification on their iDevice. AMBER Alerts, as iDownloadBlog notes, "are sent out to the public on the suspicion of a child abduction." While the more general Emergency Alerts would be activated in the event of severe weather, such as an approaching hurricane or flash flooding. As of this moment, we're not sure how Apple is going to fit this clever feature into the final release of iOS 6. From what we've heard, the toggles haven't appeared on all U.S. iDevices running iOS 6 beta 1, and even so, they'll surely be country-specific and perhaps even U.S.-only (at least to begin with). If you've spotted something in iOS 6 beta 1 that we haven't published on, be sure to let us know in the comments. Source: CNET Via: iDownloadBlog 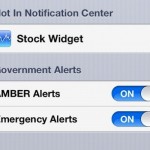 In iOS 6, Apple Has Added Push Notifications For Government Alerts

In iOS 6, Apple Has Added Push Notifications For Government Alerts
Nothing found :(
Try something else