You are using an outdated browser. Please upgrade your browser to improve your experience.
by A.T. Faust III
June 28, 2012
Uncovered today, Google's Nexus 7 tablet is guaranteed to put a wrinkle or two in the fabric of our current mobile patchwork. With a budget-friendly $200 price-point and excellent specs for the money, the ASUS-built slate is making an aggressive statement that Android (4.1) is finally ready for tablet primetime. Of course, due to its diminutive size and limited capabilities, it's hard to see the Nexus 7 as a direct iPad competitor. However, since it costs only 40 percent as much as Apple's flagship, some folks are sure to choose Nexus over iPad as an entry to the market. But many more are likely to pick the Nexus 7 over Amazon's Kindle Fire and Barnes & Noble's Nook. Looking at the Nexus 7 in that light, then, it's a difficult call. Certainly, its hardware is monumentally better than either of the aforementioned booksellers' tablets, but the Fire and Nook both have robust inbuilt storefronts that cater specifically to readers. On the other hand, if you don't spend too much time reading books, the Nexus 7 looks to be a much more capable interactive device. Its IPS display is more vibrant and pixel-dense than the competition's, and the browser experience -- provided by the first mobile version of Google Chrome to ship in a consumer product -- promises to be the smoothest 7-inch experience anywhere. Available content is one thing, but when it comes to raw power, numbers don't lie: However, when compared to the iconic iPad, the Nexus 7 doesn't fare nearly as well. There's little debate as to which device is superior (hint: duh), but their target audiences are spread far enough apart financially that it probably doesn't matter. So even if the iPad and Nexus 7 aren't competing Apples to apples, Google's tablet could put a small, Fire-sized dent in Cupertino's dominant market share. To make that happen, though, Google will really need to step up and commit to the platform going forward (which history suggests is far from a sure thing). I, for one, hope Google comes through. Indeed, many of us around the AppAdvice offices are planning to buy the Nexus 7. And that, coming from such a dedicated, Apple-loving staff, speaks volumes. Whether we end up keeping them is another matter. That ball, as usual, is in Apple's court. Image: SlashGear 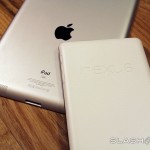 Nexus 7 Will Compete With iPad On Price But Not On Paper
Nothing found :(
Try something else