You are using an outdated browser. Please upgrade your browser to improve your experience.
by Aldrin Calimlim
July 20, 2012
Information Architects has once again written a significant update into its popular namesake app, iA Writer. I've said it a million times and I'll say it again: iA Writer is my writing weapon of choice. It's long been a fixture on my iPhone and iPad. And the reason for that is quite simple: iA Writer is simple. Not lazy-simple, but great-simple. Like its Mac version, iA Writer offers a writing environment sans unnecessary bells and whistles. It even has a focus mode in which only the three lines you're currently working on are clearly visible. Ease in typing is also a priority in iA Writer. This is made apparent by its innovative keyboard extension, which facilitates cursor movement and punctuation entry. Of course, these features will be all for naught if the app turns out to have no reliable file storage system. Fortunately, iA Writer has just that. And thanks to its latest update, that very system has been substantially improved. The app allows for local, iCloud, and Dropbox storages. The latter has long enabled saving files in folders, but it's only now that the other two types of storage gain folder support. In keeping with the app's emphasis on simplicity, folder creation in local and iCloud storages is a simple matter of dragging and dropping a file into another. In addition to folder support, a virtual trash can has also been introduced for files deleted from the local and iCloud storages. Furthermore, VoiceOver optimizations and the ability to open files with other apps are brought by the latest iA Writer update. Optimized with super sharp Retina graphics for both iPhone and iPad, iA Writer is available in the App Store for only $0.99. If you haven't downloaded this outstanding app (so outstanding, in fact, that it has "inspired" at least one shameless ripoff), act now before it reverts to its regular price of $1.99. Come to think of it, that's still a steal for an app of iA Writer's quality. 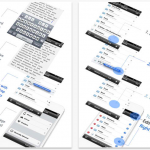 Another iAwesome Update Comes To iA Writer
Nothing found :(
Try something else