You are using an outdated browser. Please upgrade your browser to improve your experience.
by Brent Dirks
July 24, 2012
Apple is finally beginning to put hard numbers on what it believes it is owed from Samsung in the U.S. patent fight between the two companies. In recently filed court documents, uncovered by FOSS Patents, Apple is looking for a whopping $2.5 billion.

“Samsung's infringing sales have enabled Samsung to overtake Apple as the largest manufacturer of smartphones in the world. Samsung has reaped billions of dollars in profits and caused Apple to lose hundreds of millions of dollars through its violation of Apple's intellectual property. Apple conservatively estimates that as of March 31, 2012, Samsung has been unjustly enriched by about [redacted; presumably $2 billion] and has additionally cost Apple about $500 million in lost profits. Apple also conservatively estimates that it is entitled to over $25 million in reasonable royalty damages on the proportionately small set of remaining sales for which it cannot obtain an award of Samsung's profits or Apple's own lost profits, for a combined total of $2.525 billion”

And that number could increase, as Apple believes that Samsung infringed willfully, which would cause some parts of that damage figure to triple. But Apple is at least willing to give a little, too. In a separate patent fight, Samsung is asking for 2.4 percent of Apple’s sales for royalties on some of its patents. Apple is willing to give something, but a much smaller number - $0.0049 cents per unit sold. Yep, that’s half a cent. Recently, key executives from both companies met in the hope to resolve the dispute before a July 30 deadline. But with this recent filing, it looks like Apple is ready for what should be an interesting trial. In the United Kingdom, Apple is also appealing a court order from a judge requiring that what amounts to an ad for Samsung be placed on its website and in several publications in the country. If you’re interested in reading up on the patent fight between the two companies that spans the globe, take a look at all of our coverage. Source: FOSS Patents Via: AllThingsD 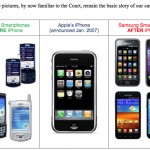 Apple Asking For Huge Sum From Samsung In US Patent Fight

Apple Asking For Huge Sum From Samsung In US Patent Fight
Nothing found :(
Try something else