You are using an outdated browser. Please upgrade your browser to improve your experience.
by A.T. Faust III
July 5, 2012
Ever since Apple settled Proview's frivolous trademark suit over the iPad name for a whopping $60 million, the vultures have been coming out of the woodwork. First, Jiangsu Xuebao, a Chinese toothpaste and shoe polish company, sued Apple over its supposedly-infringing "Snow Leopard" trademark, and now Zhizhen Network Technology is taking Apple to court over Siri. According to a report by M.I.C Gadget,

Apple's Siri infringes on one of Zhizhen's patents so-called 'ZL200410053749.9', which is a patent for 'a type of instant messaging chat bot system' called Xiaoi Bot.

However, M.I.C. Gadget goes on to explain that any perceived patent violation may not have been the actual impetus for the case. Instead, Zhizhen apparently took umbrage at the commercial explanation -- yes, the explanation -- of Siri's basic functionality. Specifically in question was

the introduction that Apple used on their China’s official website to explain what Siri is, which says “it (siri) can understand what you say and what you’re asking for, and it can find the answer that you are looking for on the web”.

While that definition is no longer on the website in question, the suit is going forward and is currently in pretrial negotiations. Sheesh. Source: M.I.C. Gadget Via: TUAW 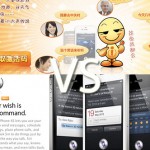