You are using an outdated browser. Please upgrade your browser to improve your experience.
by Bryan M. Wolfe
July 10, 2012
It seems that everyone is selling the iPhone these days, except T-Mobile USA. However, that could soon change, according to Bloomberg. Beginning next year, the nation’s fourth-largest wireless carrier could finally sell Apple’s handset. This could be thanks to an agreement signed by Cupertino and T-Mobile’s parent company, Deutsche Telekom, according to Sanford C. Bernstein’s Craig Moffett. The analyst, writing in a new research note, states it is “increasingly likely" an agreement will soon allow T-Mobile to sell iPhones in the U.S. next year. In March, we reported that T-Mobile's new LTE service, which will just happen to come online in 2013, could be the catalyst for the company to get the next iPhone.

T-Mobile’s absence from the iPhone game comes at a time when an increasing number of U.S. carriers have recently signed agreements with Apple to do so. This year alone, regional carriers like Alaska Communications, Appalachian Wireless, C Spire, Cellcom, GCI and nTelos have become iPhone resellers. In addition, Cricket Communications and Boost Mobile are now offering the handset prepaid. In total, 11 U.S. carriers now carry the iPhone. Meanwhile, T-Mobile’s woes have only continued during this time. The carrier lost 510,000 monthly subscribers in the first quarter while rivals AT&T and Verizon Wireless together added 688,000 so-called post-paid customers. More than half of the smartphones sold at AT&T and Verizon in the first quarter were iPhones. Says Moffett:

The iPhone availability at T-Mobile USA would likely reduce contract losses at that company, and push Deutsche Telekom U.S. to a net revenue growth position much sooner than the market expects.

If T-Mobile does get the iPhone, it will come over a year after AT&T's attempt to acquire the Bellevue, Washington company fell through. Will you wait for the T-Mobile iPhone? Source: Bloomberg 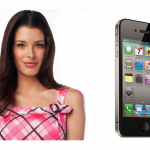 Finally, The T-Mobile Girl Could Be Getting The iPhone

Finally, The T-Mobile Girl Could Be Getting The iPhone
Nothing found :(
Try something else