You are using an outdated browser. Please upgrade your browser to improve your experience.
by A.T. Faust III
July 3, 2012
Research firm NPD DisplaySearch just released the results of a new survey, and the numbers strongly indicate that tablets are the undoubted wave/way of the future:

Though emerging markets continue to dabble in cost-effective tablet solutions, they likely won't be responsible for the tablet segment's medium-term growth. Instead (and expectedly), the world's mature markets -- including North America, Japan, and Western Europe -- will remain the driving force behind tablet computing's rapid adoption for the period in question. Why? Says NPD senior analyst Richard Shim,

Seems obvious enough. Of course, to me, the whole thing's pretty obvious. Heck, I've been saying this and living this (and loving this) since 2010! It's nice to live in the future. Source: NPD DisplaySearch 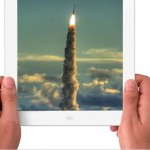 Led By iPad, Tablets To Outsell Laptops By 2017

Led By iPad, Tablets To Outsell Laptops By 2017
Nothing found :(
Try something else