You are using an outdated browser. Please upgrade your browser to improve your experience.
by Brent Dirks
July 26, 2012
If recently published patent applications are any indication, Apple apparently has a lot more in store for NFC-enabled iOS devices than just mobile payments. Patently Apple has a detailed report on the information that could one day see iOS devices interact with the rumored standalone Apple television, the current Apple TV box, and other surprising technology. While controlling a standalone television and add-on box aren’t real stretches for iOS devices, some of the new patents tackle controlling a video game system, which is definitely an exciting development. A drawing in the patent documents depicts control initiation operation between an iPhone and a game controller. The controller may be a video game system or something like the current Apple TV. And past video games, the applications show that Apple is hoping to use NFC technology in iOS devices to control things like standalone cameras, projectors, in-home security systems, lawn sprinkler systems, thermostats, and garage doors In late June, reports surfaced that said the next-generation iPhone will indeed offer NFC technology. And the built-in Passbook application in iOS 6 seems like an obvious candidate for this purpose. But these patent applications offer some other, exciting uses of the technology that we’ll hopefully see soon. Source: Patently Apple 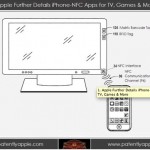 Patent Applications Show NFC-Enabled iOS Devices Doing Much More Than Just A Mobile Wallet
Nothing found :(
Try something else