You are using an outdated browser. Please upgrade your browser to improve your experience.
by Tommy Ly
July 13, 2012
I don't know if I'm some freak of nature, but the earphones and microphone combo that Apple included with my iPhone 4S just don't work for me. I can barely get them in my ears. It's a darn shame ... I've been in dire need of a headset for hands-free calls, but I can't justify buying a new one when I've had a perfectly functional one sitting on my desk for almost a year. If Apple offered something like the SecureTips Kickstarter project did, then I'd be in luck, as Apple's closest option is a bit too pricey for me at $79. SecureTips are a pair of silicon rubber wings that slip over your existing Apple earphones. The tips then secure the earphones in your ear, which eliminates the main problem associated with Apple's earphones. You can see some benefits of SecureTips in this video: Each set of SecureTips comes in three different sizes: small, medium, and large. Initially, they will be offered in white, black, red, blue, and "Kickstarter green." A $20 pledge will get you a set of SecureTips, which isn't so bad compared to the price of a new headset. Unlike some other Kickstarter projects we've covered, SecureTips are a product I'd actually use. If the project reaches its $50,000 goal, SecureTips are expected to ship this November. Even though some things may change on the next iPhone, I'm pretty sure the included earphones won't. Would you try a pair of SecureTips? 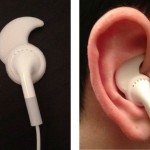 SecureTips Keep Apple's Earphones In Your Ears
Nothing found :(
Try something else