You are using an outdated browser. Please upgrade your browser to improve your experience.
by Aldrin Calimlim
July 1, 2012
I've touched on the accessibility of iOS and expressed my appreciation of it in a previous post. But today I'm revisiting the topic with renewed fascination, thanks to a recent TUAW article about a new kind of iBooks e-book. In the article, TUAW chats with Adam Stone, an author whose first book has just been released in the iBookstore. Stone's book is a children's book — nothing inherently remarkable about that. What makes his book special is that it is, quite possibly, the first e-book with embedded American Sign Language (ASL) translations. Stone's book is, according to its iBookstore description, the "story of a fork who's missing one of his prongs, but not his brave spirit." Titled Pointy Three, it's presented in both English and ASL, with the traditional English text on each page accompanied by an ASL narration video. Another interesting thing about Pointy Three is that it was created by Stone using iBooks Author. Stone ruled out turning it into an app instead since he has no knowledge of app programming. But with the relative ease provided by iBooks Author, he was able to develop Pointy Three as a bilingual iBooks e-book. "Apple products constantly open new frontiers." That's Stone's main takeaway from his experience. And in further support of that sentiment, he shared that he wrote the initial story in the Notes app when the idea for the book struck him while inside a train. As someone who has worked with the deaf using ASL, I couldn't be more pleased with the publication of a book like Pointy Three. And as an Apple devotee, I couldn't agree more with what Stone said. Source: TUAW Via: Cult of Mac 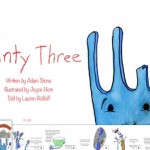