You are using an outdated browser. Please upgrade your browser to improve your experience.
by Lory Gil
July 25, 2012
About a month ago, we told you about a Kickstarter accessory that will give your iPad Smart Cover additional viewing angles without adding additional bulk or weight. A couple of our more opinionated readers had something to say about this clever device, commenting that it is too expensive or that you can get the same effect with a plastic door guard. We decided to give the Smarter Stand a try and give you a hands-on review of what this little doodad is all about. The Smarter Stand comes with two plastic clips plus one non-slip pad for those of you who still have the Smart Cover, not the Smart Case. The non-slip pad is used to keep the iPad from sliding around when it is angled. The Smart Cover isn’t smart enough to keep it from slipping back down. 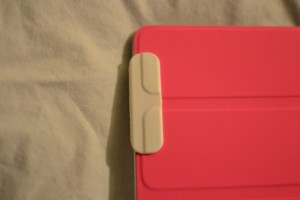 The two clips are positioned on each side and then adjusted across the Smart Cover or Smart Case’s folding joints to lock it into a new angle. The clips can be repositioned easily by sliding them up and down. The instruction manual shows that the Smarter Stand adds three additional viewing angles to the Smart Cover, but I found that, with a little imagination, the clips can give your iPad at least six different angles. 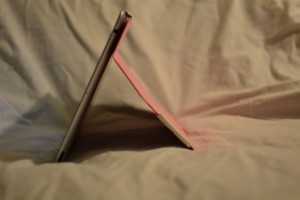 By putting the clips on the first fold of the Smart Cover, closest to the iPad, you can position your device at a 33-degree angle. Leave one clip on the first fold and move the one on the other side to the second fold and your iPad will be displayed at a 45-degree angle. Move both clips to the second fold, farthest from the iPad, and your device will set low, for typing, but the Smart Cover will stick upright, giving you privacy while you type. 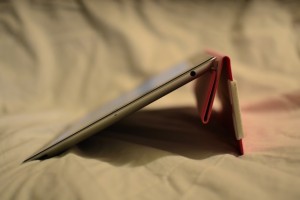 You can also move both clips to the third fold for a low angle that is slightly higher than typing, or adjust the Smart cover to stand the iPad upright for a higher viewing angle. This is more than 45 degrees but less than the Smart Cover’s normal, near-upright, angle. If you put both clips back on the second fold, you can reposition the Smart Cover to allow for a taller angle. You don’t get the privacy screen that the typing angle mentioned above gives, but my point is that you can alter the Smart Cover’s position to allow for a fairly large variety of viewing options. 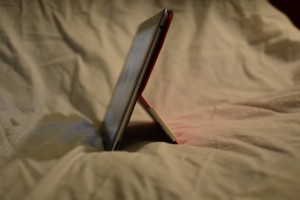 The clips themselves are made of a rigid, dense plastic. I was given a beta version of the Smarter Stand to review that was made with a different type of plastic. While the durability and look of the prototype that I reviewed was just fine, I had a hard time sliding the clips up and down on the Smart Cover. I was assured that the final product will be easy to slide around, while remaining sturdy and long-lasting. 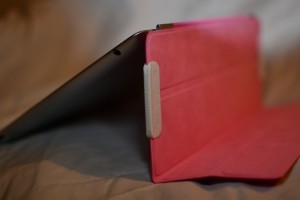 The non-slip pad is made of silicone and has a sticky backing. The pad is placed on the outer edge of your iPad, opposite of the hinge-side of the Smart Cover. It is easy to put on and stays put, even when being pushed against by things like iPad sleeves or docking clamps. Unfortunately, because it is so sticky, it leaves behind a residue when the non-slip pad is removed. I was able to easily remove the excess by rubbing it off with just my finger, but it is important to mention that the non-slip pad will leave a small amount of sticky stuff behind on your iPad. [UPDATE] A quick update about the sticky residue that is left behind on the iPad after you remove the non-slip pad: Guess what? It's supposed to stay there. According to the developer, in an effort to find a robust sticking mechanism for the non-slip pad, they decided on a type of double-layer tape made by 3M. This particular type of tape is designed to be left behind when you remove an object so that it can easily be removed without leaving a mark. Like I mentioned above, it comes of with a couple of rubs. Don't worry, your iPad won't be permanently scarred. It isn't even as sticky as a kid's scratch-and-sniff sticker. 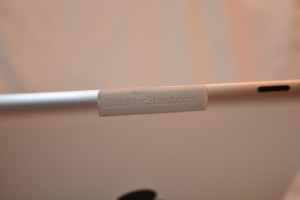 For our readers that say you can do the same thing with a binder clip, you’re wrong. I tried it and, not only was I constantly worried that the clips would scratch up my iPad’s screen because they stick out so far, but I also noticed that they left indentations on my Smart Cover. Binder clips are not designed for the Smart Cover. The Smarter Stand is. Also, binder clips don’t come with a non-slip pad. As for the door guards; why would anyone want to remove door guards that could potentially keep you from causing hundreds of dollars in auto body damage just so you can save $12 on the Smarter Stand? That’s just silly. 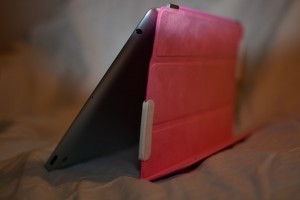 Overall, I’d say the Smarter Stand is a helpful way to offer additional viewing angles for your iPad if you use a Smart Cover or Smart Case. It is reasonably priced at only $12 ($14 if you want a specific color) and you can even get one additional clip and non-slip pad just by “liking” it on Facebook. The Kickstarter campaign for the Smarter Stand ends on August 13. So far, the product has raised $124,000 and has sold out of the $9, $10, and $11 early-bird prices. Currently, there are only about 350 of the $12-priced units left, so I suggest you head on over to the site and pledge your ever-loving pennies to get your Smarter Stand before time runs out. 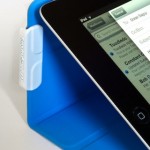 Apple’s Smart Cover for the iPad Just Got A Little Bit Smarter: A Hands-On Accessory Review

Apple’s Smart Cover for the iPad Just Got A Little Bit Smarter: A Hands-On Accessory Review
Nothing found :(
Try something else