You are using an outdated browser. Please upgrade your browser to improve your experience.
by Tommy Ly
July 1, 2012
What would it take for you to switch from iOS to Android or any other platform? Would a heavy discount do the trick? What about a free Samsung Galaxy S III? According to a survey conducted by Goldman Sachs, 21 percent wouldn't make the switch for any price, as AppleInsider reports. Over 1,000 smartphone users were surveyed in an attempt to understand the costs that consumers face when they switch platforms. The results were (un)surprising. According to the survey, about 21% said that no discount would justify the switch from iOS to another platform. Of course, this was a relatively small survey, but one-fifth of the participants stating that they wouldn't make the switch - even if given free devices - says a lot about their brand loyalty. When asked what the likelihood that was that their next smartphone or tablet would be an Apple product, a respectable 62 percent of participants that already owned one Apple device said it was highly likely. That number jumped to a staggering 75 percent for participants that already owned two or more Apple devices. There's a lot to consider when looking at these numbers. For me, I'd fall into the "no discount would make it worthwhile" category. I already have all my important data synced up between my iPhone, iPad, and Mac. With OS X Mountain Lion coming this fall with all its iOS-integrated features, the thought about switching platforms becomes even less appealing. The familiarity of iOS is something that will be tough to unlearn even if I wanted to, as it's been a part of how I do things for the past few years. Plus, I've spent a good amount of cash on apps since I got my first iPhone. Switching to an Android or Windows phone wouldn't do me any good, would it? There are other smartphones available with admittedly better specs and hardware than the iPhone. As far as tablets are concerned, the iPad still reigns supreme, but I'll probably pick up a Google Nexus 7 when it launches (it looks pretty nice, okay?). However, I won't abandon any of my iDevices. So, what do you think it is that makes Apple's customers so loyal to the brand? Is it just convenience? Or, obligation due to investments in apps? What would it take for you to switch platforms? Source: Goldman Sachs Via: AppleInsider 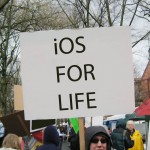 Survey: 21 Percent Of iOS Users Wouldn't Switch Platforms For Any Price
Nothing found :(
Try something else