You are using an outdated browser. Please upgrade your browser to improve your experience.
by Brent Dirks
July 12, 2012
Tap Tap Revenge is back. Disney’s Mobile’s Tap Tap Revenge: Tour will be hitting the App Store momentarily. The game promises to be a major re-launch of the franchise with a substantial amount of new features. The user interface is entirely redone from past games in the series as the new app streamlines and simplifies the overall experience. Players can slice through the music with special tappers, use multi-directional shake capabilities, or play along to enhanced visual themes like in-game music video backgrounds. As far as music, the game is boasting the biggest launch catalog ever for a Tap Tap Revenge game. Available at launch are embedded free hit songs from top artists LMFAO, AVICCI and Selena Gomez, and featured artists Goyte, Carly Rae Jepsen and Kaskade (feat. The Neon Trees.) The game also includes a rotating free music store of more than 300 tracks, in addition to 17 bundles of new premium content available for in-app purchase. A free song will also be given away daily. As a nice touch, tracks can be imported in from previous games in the series. Here’s a trailer for the game. Click here if you can’t see the video. The “tour” part of the game borrows liberally from games like Rock Band. While on tour, users can play an opening, supporting, and headliner act in a new city every day, and unlock encore acts to earn bonus points and gain weekly rewards. Rockers can also win prizes and merchandise to show on the tour wall, which can be shared with friends on Facebook. The Tap Tap Revenge series has been a staple of the App Store since its launch in 2008. Tap Tap Revenge 4, released in late 2010, was the last major game in the series. On Christmas Day of that year, the app was being downloaded at the rate of 45,000 times per hour. Tap Tap Revenge: Tour is available for the iPhone/iPod touch and iPad. It can be downloaded free in the App Store, and should be live tonight. 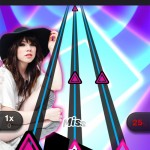