You are using an outdated browser. Please upgrade your browser to improve your experience.
by Bryan M. Wolfe
July 23, 2012
In one week's time, July will be in the history books. When that happens, we’ll enter a three-month period that will almost certainly include the date Apple will unveil the next iPhone. Don’t believe me? Consider these latest rumors. According to CNET, the sixth-generation handset is now in production at a Taiwan-based Pegatron facility. Separately, Reuters is reporting that the next iPhone will feature a new, 19-pin connector. Neither of these rumors – and yes, they remain rumors, are surprising. We’ve long suspected that Apple will reveal the next iPhone sometime in August, September, or October. Additionally, we’ve long heard rumors that Apple would ditch the 30-pin connector they have long used on iDevices and replace it with a smaller connector. According to the most recent report, Apple will do so “to make room for the earphone moving to the bottom,” of the iPhone. When the next iPhone does arrive, and I’m still predicting a September unveil, it will likely include a larger screen, perhaps an A6 chip, and much more. One thing is certain: the guessing game is getting ever-closer to the end. Now, if we can just get past August. Sources: CNET, Reuters 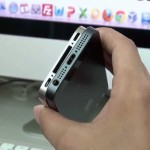 The Next iPhone Is In Production, With New Hardware In Place

The Next iPhone Is In Production, With New Hardware In Place
Nothing found :(
Try something else