You are using an outdated browser. Please upgrade your browser to improve your experience.
by A.T. Faust III
July 10, 2012
Ever since we explored the idea of a 7.85-inch iPad mini several months ago, the concept's been picking up steam all over the blogosphere. Indeed, the inimitable John Gruber himself supported and researched the notion, and his contacts inside Apple eventually confirmed that Apple was in fact hard at work on just such a (slightly) diminutive device. Of course, detractors and doubters are quick to claim that 7-inch tablets go against Steve Jobs' outspoken design ethos, and they're correct: 7-inch tablets do go against everything that Steve and Apple and iOS stand for. But 7.85-inch tablets don't. Gruber explains the math of it all:

Gruber goes on to touch on several more key aspects, including pricing, profitability, and the merits of the purported iPad mini (It is not a bigger iPod touch!) beyond the dollar and past the simple short term. We highly recommend you check out his full article over at Daring Fireball. Of course, if you just wait a while, you can probably revisit it on your shiny, new, 7.85-inch screen. Source: Daring Fireball Via: MacRumors Image: @trojankitten 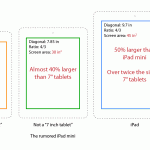 The Purported iPad mini Is Far From A Lowly 7-Inch Tablet
Nothing found :(
Try something else