You are using an outdated browser. Please upgrade your browser to improve your experience.
by Bryan M. Wolfe
July 24, 2012
Forget the next generation iPhone. Apple is also reportedly set to release a new iPod touch this fall. The fifth generation iDevice will include a longer screen, an A5 processor and more, according to Macotakara. First launched in 2007, the iPod touch has often been described as an iPhone without a cellular connection. With rumors suggesting the next iPhone will receive a significant upgrade this fall, it shouldn’t come as a surprise that Apple is likely to offer a new update for the iPod touch as well. According to the report, which we’d like to stress is only a rumor until Apple says otherwise, the next iPod touch will include the same A5 processor as the current iPhone 4S. In addition to providing a taller, four-inch display, the fifth iPod touch could also include a rear-shell that will remind many of the new iPad. The current iPod touch has a shiny aluminum shell, while the new iPad has a buffed shell. Finally, the report suggests the iOS device will include some sort of hole towards the bottom back. What this hole is for (maybe as a speaker, perhaps) remains to be seen. If Apple does update the iPod touch, it will be its first refresh since 2010. This isn't the first time we heard Apple may update the iPod touch, as a May report suggested the same. As a reminder, Apple is largely expected to update the entire iOS device line in September and October. Additionally, rumors continue to swirl that an iPad mini will also debut at the same time. Source: Macotakara 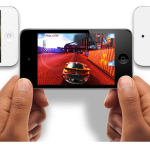 Yes, A New iPod touch Is Likely Too

Yes, A New iPod touch Is Likely Too
Nothing found :(
Try something else