You are using an outdated browser. Please upgrade your browser to improve your experience.
by Joe White
August 7, 2012
Apple has recently launched a brand-new promotional video (along with an accompanying case report), which flaunts Land Rover's success with the Cupertino, Calif. company's iAd advertising platform. It's no secret that iAd got off to a troubled start back in 2010, with Apple lowering its minimum iAd buy in February, 2011, in the hope that more big names would jump on board and take the mobile advertising platform for a spin. Since, things have picked up: in the same year Apple scored its 100th iAd client, and iOS developers this year learned that they'll receive a 70 percent cut of iAd revenue from ad-clicks made in their apps (rather than just 60 percent). In the below Land Rover video, emphasis is placed on the power of Apple's iAd design team and engineers, who were able to create an effective, fun and impressionable mobile advertisement for the car manufacturer. For those who don't know, Land Rover's iAd included a car design-game, and an augmented reality-powered look inside one of Land Rover's cars. As the promotional video notes:

"There is a difference between someone sitting on their couch absorbing that 30-second television ad and someone actually engaged in their iPhone or their iPad. There’s definitely higher attentiveness with something like an iAd as opposed to a television ad."

Below, we've embedded the video for your viewing pleasure. For more information on the "Apple + Land Rover" relationship, head over to Apple's website. 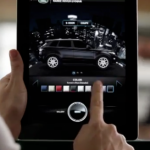