You are using an outdated browser. Please upgrade your browser to improve your experience.
by Joe White
August 1, 2012
News Corp has been trying hard to revive The Daily, even going so far as to launch a new, weekend newspaper earlier this month. But it looks like things have gone too far for Murdoch's team, as the digital newspaper - which, once, looked to be a killer nail in print journalism's coffin - has just laid off one third of its staff. The news reached us via All Things Digital, who notes:

The Daily, News Corp.’s attempt to create a digital newspaper for the iPad age, is laying off nearly a third of its staff. The publisher plans to tell its workers today that it will fire 50 of its 170 employees, according to people familiar with The Daily’s plans.

Admittedly, The Daily didn't exactly get off to a great start. Countless fans, despite Apple's "special interest" in the app, found it to be sluggish from the beginning. And as Bryan told us all just over a year ago, a lack of performance optimization updates wasn't the only problem readers of the tablet-only newspaper faced. Below, we've included a press release outlining the news. Are any of our readers still subscribing to and using The Daily? If you are, let us know in the comments.

The Daily Announces Content Changes, Staff Reorganization New York, NY, July 31, 2012 – The Daily, News Corp’s daily national news publication built exclusively for tablets and touchscreen devices, today announced content and personnel changes at the publication designed to streamline its production, focus resources on its most popular features, and reflect the changing business environment for news and media. The implemented changes to The Daily include the following: Ø A total of 50 full-time employees, 29 percent of the full-time staff, will be released. Ø The Sports and Opinion sections, which saw the lightest traffic, are being reorganized. Sports reporting will now be provided by content partners, like Fox Sports, while existing features like photo galleries and the ability to track favorite teams via a customizable sports page will remain. The Daily will no longer have a standalone Opinion section. Opinion pieces and editorials will appear in the news pages, clearly marked, from time to time as appropriate. Ø The Daily will move to a portrait-only orientation – the mode in which the vast majority of its readers view content – though video will still be viewable in landscape mode. Ø The Daily will continue to invest in the content its readers use the most: original reporting, strong visual elements, great photography and video, award-winning design, infographics, and interactivity. These are the features that continue to make The Daily unique and that have seen heaviest traffic; they will make up a greater percentage of each edition going forward. “These are important changes that will allow The Daily to be more nimble editorially and to focus on the elements that our readers have told us through their consumption that they like and want,” said Editor-in-Chief Jesse Angelo. “Unfortunately, these changes have forced us to make difficult decisions and to say goodbye to some colleagues who have worked hard to make The Daily successful. These moves were driven by the needs of the business. The Daily is the first of its kind, and it remains the best of its class. We are still in the infancy of this innovative new media platform, but we have delivered excellent content, steadily increasing readership, quality reporting, and award-winning design. Our standards will not diminish as we move forward, nor will our enthusiasm for creating an outstanding daily digital publication.” “We continue to believe in the future of tablet publications because we know the market for tablets and touchscreen devices will only expand,” said Publisher Greg Clayman. “As more and more people buy and use tablets in their daily lives, The Daily will grow with them. We have consistently remained one of the top-ranked paid news apps since our launch, we have steadily grown our subscriber base, and we have the world’s largest media and publishing company behind us. Like all good digital products, however, we must change and evolve to remain fresh, competitive and sustainable.” 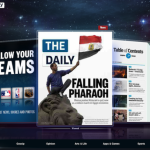 Bad News For The Daily, As News Corp's Digital Publication Lays Off A Third Of Its Staff

Bad News For The Daily, As News Corp's Digital Publication Lays Off A Third Of Its Staff
Nothing found :(
Try something else