You are using an outdated browser. Please upgrade your browser to improve your experience.
by Joe White
August 1, 2012
Some folks might have trouble categorizing the iPad as a 'PC', but if we are to place Apple's touchscreen tablet in the category, the Cupertino, Calif. company has continued to ship more "computers" than any other manufacturer. According to new figures from Canalys, Apple now holds a 19 percent share of worldwide PC shipments, having shipped more than 21 million PCs in Q2 2012. Just six months ago, data from the same company estimated that Apple held a 17 percent share of the total worldwide PC shipments, thanks to the sale of 15 million iPads and 5 million Macs. However, this already impressive figure has continued to grow during the quarter in which the company's new iPad launched, positioning Apple at the top of the table with a 19 percent share. Following Apple is HP, with a 12.5 percent share, and Lenovo, who has a 12.1 percent share. Here's the table: Like we said back in January (explaining a point made by TUAW’s Kelly Hodgkins), the iPad's categorization as a computer isn't exactly firm. A number of analysts believe that the iPad should form a "new category" of consumer device, and that its sales shouldn't be compared with Windows-powered PCs and Macs. But regardless, as of this moment such a decision hasn't been made, and Canalys (and more) are still bundling it as a PC. It's important for Apple's positioning in the above table for the iPad to be classed as a computer, for the simple reason that the majority of its computer sales are iPads. As the Canalys report explains:

‘There is now a large base of replacement buyers that simply must have the latest Apple product, and the decision to continue shipping the iPad 2 at lower price points has opened up new customers, for example in education,’ Evans added. ‘One drawback of the stand-out retina display in the new iPad [sic], however, is the increased storage demanded by HD content. An upgrade, without a big price increase, is a must for the next generation of product.’ 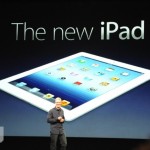