You are using an outdated browser. Please upgrade your browser to improve your experience.
by Bryan M. Wolfe
August 16, 2012
Much of the discussion in recent months has centered on the upcoming release of the sixth-generation iPhone and so-called “iPad mini.” Now, another possible Apple product is making news again - the so-called iTV. Unfortunately, the news suggests an Apple-powered television is no longer a possibly, at least in the short-term. The Wall Street Journal says that Apple is reaching out to cable providers to discuss a set-top box that would work with any television. This box, which consumers would buy without monthly fees attached, would work a lot like boxes already available from TiVo Inc., and Samsung Electronics Co., but with an Apple twist. According to the report, the Apple set-top would be a much “less radical path” for Cupertino to enter the television business. As such, Apple would team up with existing service providers rather than “licensing content to compete with them directly.” These talks, which are ongoing, suggest that there has been a significant shift in thinking at Apple since Tim Cook was elevated to CEO following the death last year of Steve Jobs. The late Apple co-founder is said to have dismissed the idea of working with cable operators. Instead, Jobs was rumored to be working on an actual Apple television. In fact, in his official biography by Walter Isaccson, Jobs concluded that he had "cracked" the Apple television concept. Now it appears that Apple is forgoing the iTV and will instead refocus its attention on making a better Apple TV. Even in its current form, the existing Apple TV product remains a “hobby” product, although it has grown more popular in recent years. For example, sales for the Apple TV in the previous quarter were up 170 percent year-over-year. As someone who was hopeful that Apple would release a television next year or in 2014, as rumored, this news is upsetting. Still, it doesn’t necessarily mean an Apple branded television is dead. Rather, the set-top could represent just the first of many moves made by Apple to become a serious player in the home entertainment market. After all, a set-top box would work on any television and would be a far less expensive proposition than an actual television would be, especially in these times of economic uncertainty. Personally, I’d love to see Apple make a play for TiVo and be done with it. A merged Apple TV/TiVo box would be popular, in my opinion. Still, it wouldn't be an iTV. We’ll keep you updated. 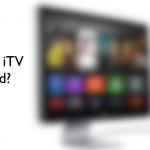 Has Steve Jobs' iTV Been Cooked?

Has Steve Jobs' iTV Been Cooked?
Nothing found :(
Try something else