You are using an outdated browser. Please upgrade your browser to improve your experience.
by Bryan M. Wolfe
August 13, 2012
We’ve heard what seems like hundreds of rumors about the next iPhone. At the same time, we’ve seen a steady, yet smaller stream of iPad mini stories. Count me as one of those that have believed Apple would unveil a smaller iPad mini this fall. However, now I’m not so sure and here’s why. I’m so sure that Apple will unveil the sixth-generation iPhone next month that I’d probably bet my September paycheck on it, if necessary. The reason being is that all of the necessary indicators are there to suggest that Sept. 12 is going to be iPhone Day. For one, the most recent iPhone rumors pretty much tell the same story; that the handset will be longer and thinner than the iPhone 4/4S, and include 4G/LTE capabilities. In confirming these details, many of these stories have attached photographs purportedly showing the front panel and/or parts for the next iPhone. Another sign a new iPhone is coming is the growing list of discounts being offered on the 4S. Discounts, I might add, Apple is matching at their retail stores. With the iPad mini, however, key information is missing. No one, for example, has “leaked” what I would call a convincing photograph of the long-rumored tablet. Sure, Apple.pro released some shots last month, but none of these are all that compelling. Additionally, where are the iPad mini specs? All we’ve heard at this point is that display production on the iOS device has begun, and that the tablet won’t have a camera. Oh, and yes; the iPad mini would be great for Apple’s bottom line. Beyond that, we know next to nothing. As CMSWire puts it best:

The iPad Mini could still be a collective hallucination experienced by the tech world. While we've seen enough parts of an iPhone 5 that you can practically build your own (if you have the right contacts in enough Asian factories) the diet iPad remains a ghostly enigma.

I’m not saying that the iPad mini is a fantasy. In fact, I’d probably bet someone at least a days’ worth of salary that Apple will unveil the iOS device next month. Still, even the greatest of fanboys among us has to face the possibility that the device isn’t real. Besides, even the iDevice's name, "iPad mini" was something cooked up by Apple bloggers. For a company that has long been known for their ability to keep secrets, Apple has allowed many iPhone rumors to leak, while those for the iPad mini have proven sparse. In other words, either Apple is holding the iPad mini much closer to the vest compared to the next iPhone, or the smaller tablet doesn’t exist at all. Real or imagined, we’ll know more about the iPad mini next month. In the meantime, be sure to check out our popular report, Apple Has 163 Reasons To Release Fabled 'iPad mini.' 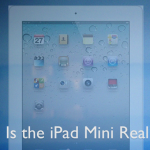 Is The iPad Mini Just A Fanboy Fantasy?

Is The iPad Mini Just A Fanboy Fantasy?
Nothing found :(
Try something else