You are using an outdated browser. Please upgrade your browser to improve your experience.
by A.T. Faust III
August 4, 2012
We've all got a pretty good idea of what the new iPhone will probably look like, but the purported iPad mini -- said to be launching (or at least announced) alongside the iPhone 5 -- has remained pretty much a mystery. Until now. Maybe. Late yesterday, an unsourced user on the Chinese microblogging site Sina Weibo offered up four images of the rumored tablet, which were then published by Apple.pro: While the shell shots aren't particularly compelling, they're not altogether dismissible, either. At the very least, it's easy to imagine that they represent some early Apple production prototype. Indeed, the lack of a camera on the unit's backside would certainly indicate the Apple M.O., albeit the Cupertino company will likely include a rear-facing shooter on whatever 7.85-inch slate it actually ships. (Sure, component space will come at an all-time premium, but if they can fit a camera on the tiny iPod touch, they ought to be able to fit one on the bigger iPad mini.) At any rate, at least we have a face to put to the name, even if it's an imposter. A surprisingly flat, non-tapered imposter. Source: Apple.pro Via: iDownloadBlog 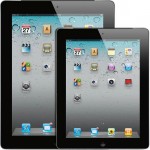 Purported iPad mini Shots Show No Shooter
Nothing found :(
Try something else