You are using an outdated browser. Please upgrade your browser to improve your experience.
by Bryan M. Wolfe
August 27, 2012
While much of the blogosphere continues to discuss Prince Harry and his royal jewels, we’ve got some more pictures of Ashton Kutcher as Steve Jobs. These photos come courtesy of Pretty Much It. As you can see, these photos are of a much older Jobs. As we first reported in April, the “Two and a Half Men” star will star will play the late Apple CEO in “jObs.” The biographical film will cover Jobs’ life from 1971 until 2000. In addition to Kutcher, the film stars Josh Gad as Steve Wozniak, and Matthew Modine as John Sculley. Previous photos from the set were leaked in May and June. Source: Pretty Much It We thank our reader Benjamin for this tip! 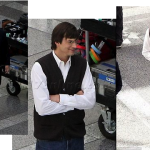