You are using an outdated browser. Please upgrade your browser to improve your experience.
by Joe White
August 7, 2012
Talk about being ahead of the game! Apple isn't expected to make iOS 6 available for another four or five weeks, but Spotify - the online music-streaming service - has just updated its universal app for iOS 6, also adding additional stations for iPad users and making a number of important bug fixes. As outlined in the app's release notes, features added in version 0.5.4 of the application include: It's likely that most applications won't receive support for iOS 6 for another couple of weeks, perhaps not even until a final "gold master" ("GM") version of iOS 6 becomes available for registered developers. Nevertheless, iDevice owners already running iOS 6 on their iPhone or iPad will appreciate Spotify's update. Currently, Spotify for iOS is available to download in the App Store for free. Take a look at the new version now, and rock on with the music-streaming application on your iOS 6-powered iDevice! 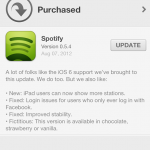