You are using an outdated browser. Please upgrade your browser to improve your experience.
by A.T. Faust III
August 9, 2012
One of the main points of contention between Apple and Samsung in their ongoing patent trial is the fact that, according to Cook and crew, the Korean company effectively piggybacked Apple's billion-dollar ad campaign to sell its copyist wares. Based on a document presented to the California court yesterday, Apple seems to have significant evidence that this was actually the case. Following Samsung's launch of the allegedly-infringing Galaxy Tab 10.1, the company commissioned a study about the effectiveness -- or, more appropriately, the lack of effectiveness -- of the device's various television advertisements. Not surprisingly, these were the survey's conclusions (via AppleInsider):

Only 16 percent of viewers observing Samsung's TV commercials realized it was a Samsung product... "Given Apple's already strong position in the tablet category," Samsung's report stated, "it is critical that attribution of [Galaxy] Tab communications improve and that communication works to differentiate Tab from iPad." ... Samsung's survey also noted that primary reason consumers were reporting for why they weren't considering the Galaxy Tab was "lack of awareness of the product," and noted that "TV advertising has had minimal impact primarily because of misattribution."

Misattribution. It's a real problem, and it exists primarily because Samsung intentionally aped the aesthetic look -- specifically the curved corners and signature metal banding -- of Apple's iPad. Indeed, back before all these courtroom fireworks had their fuses lit, I whipped up this image to illustrate Apple's case: To Apple's chief marketing exec, Samsung's misleading products -- and thereby Samsung's misleading ads -- were like a slap in the face. Phil Schiller explained to the jury:

Customers only get a glimpse of the product. ... The advertisement has to give you a sense of how it might work, and what it might do for you before you have a chance to head to the store and try it yourself. ... [N]ow when someone comes up with a product that copies that design and copies that marketing, then customers can get confused on whose product is whose, [which is tantamount to] stealing all the value we’ve created.

Of course, those Samsung ads just might have tremendous value for Apple after all. Source: CNET Via: AppleInsider 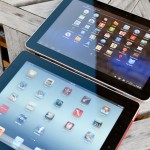 Only 16 Percent Of Customers Realized The Galaxy Tab Was A Samsung Product
Nothing found :(
Try something else