You are using an outdated browser. Please upgrade your browser to improve your experience.
by Bryan M. Wolfe
August 9, 2012
Gameloft has unveiled the trailer for their upcoming game, Wild Blood. The game is their first to feature Unreal Engine 3 technology. The announcement was made via Gameloft's Twitter account.

The 1st trailer of Gameloft 1st Unreal game is here! Check out the amazing graphics of Wild Blood for #iOS & #Android: glft.co/P1DIc0

Take a look: Featuring what appears to be a lot of blood, guts, and gore, Wild Blood is expected to arrive for iOS and Android. Unfortunately, the release date is not yet known. In March 2011, Paris-based Gameloft announced a licensing agreement with Epic Games, Inc. that enables them to incorporate the Unreal Engine 3 in four new games. The game engine includes advanced technologies such as HDRR, per-pixel lights, and dynamic shadows. This is the same technology used to power games such as Gears of War, Bulletstorm, and Batman: Arkham City. Based on the trailer, are you wild about Gameloft's latest game? 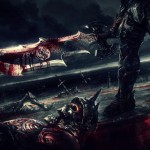