You are using an outdated browser. Please upgrade your browser to improve your experience.
by Bryan M. Wolfe
August 3, 2012
Last month, I suggested the next iPhone would launch sometime in August, September, or October. Well, August is finally here and with it the number of “iPhone rumors” will surely increase, for better or worse. Today’s entry comes from ETrade Supply, which has released a video showing what they believe is the next generation iPhone’s glass lens. As the video suggests, Apple’s next handset will include a new front panel that shows a taller display and the FaceTime camera being moved to above the earpiece. The purported iPhone includes a glass lens that is 90.25mm long, and 51.60mm wide. The iPhone 4S is 76.65mm and 51.60mm. More importantly, the resolution ratio is 16:9, which is significantly different than past models. Other findings include: Take a look: Naturally, there is no way to confirm this latest rumor. Still, because it suggests specifications already “leaked” by other sites in recent months, its validity could be genuine. As a reminder, Apple is largely expected to announce the sixth-generation iPhone on Sept. 12. For more iPhone rumors, be sure to check out our previous stories. Do you like what you're seeing? Source: ETrade Supply 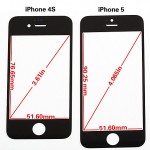 What Does The New iPhone Look Like Compared To The 4S?

What Does The New iPhone Look Like Compared To The 4S?
Nothing found :(
Try something else