You are using an outdated browser. Please upgrade your browser to improve your experience.
by Lory Gil
August 2, 2012
There are lots of keyboard cases on the market, but so many of them add so much bulk to your iPad that it doesn’t seem worth it. The point of the iPad is that it is lightweight and mobile. Making it two pounds heavier and two inches thicker defeats the purpose of the tablet. Logitech sought to solve this problem by making their Solar Keyboard Folio, their thinnest and lightest keyboard case yet. The case is made of super lightweight, soft faux leather. The interior of the case is made from flexible rubberized plastic and the keyboard itself is made from durable hard plastic, but has a soft touch. 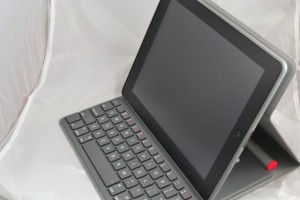 The iPad fits snugly into the case holder by snapping it into place. The little legs at the bottom of the iPad holder also work to help you maneuver it in and out without causing too much stress on the case. Once in place, the cover has one fold about a third of the way from the top that allows the iPad to rest in two different positions when standing up. The 64-key keyboard is as close to a real keyboard as you can fit into 10 inches. The Bluetooth connection works flawlessly. Just touch the button on the side with the Bluetooth icon and make sure your iPad’s connection is turned on. As soon as the Logitech case connects with the iPad, you can start typing. You don’t have to wait for it to warm up or anything. 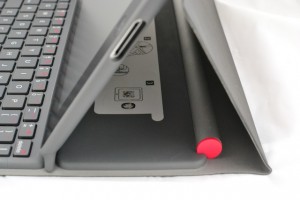 The keys type smoothly and there is no need to put strong pressure on them. The keys actually feel a lot like an Apple keyboard. They are slim and close to the case. The main difference is that the keys are slightly closer together at 1.5 mm. There are plenty of Keyboard shortcuts to turn this sleek case into a full-functioning typing panel. For example, if you hold down the command button and the number six, seven, or eight, you can cut, copy or paste without having to touch the screen. There are also alternate keys that include various symbols and letters. You can even control your iPad’s music from the keyboard. 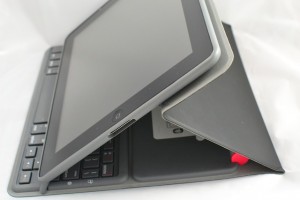 As far as solar power is concerned, you will never have to worry about running out of power for your keyboard. I intentionally left my case indoors in low light for a whole month and the battery never drained. I even used the iPad for an extensive period of time in absolute dark and the iPad ran out of battery life before the Logitech Solar Folio did. In fact, the case never once ran low on power. If you want to hold your iPad in portrait mode, or even lay it flat and hold it the way you would an uncased tablet, you don’t have to worry about accidentally activating the keys if you touch them. The Bluetooth mechanism will only connect when the iPad is resting in front of the solar battery pack. This is a great feature because I have to hold my iPad in portrait mode a lot in order to play games. In the past, when I’ve had to flip the keyboard behind me using other keyboard cases, I’ve accidentally turned on the Bluetooth by tapping the keys when holding the device in my hands. 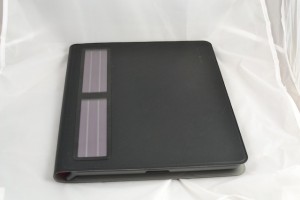 Probably the best feature of the Logitech Solar Folio is the fact that it disables Auto Correct. How many times have you written an iMessage to a friend, only to notice after you sent it that the iPad auto corrected your sentence to read something entirely different. You don’t have to worry about mistyped messages any longer. Misspelled words will still have a red line under them, but it won’t automatically change to what ever the iPad thinks you meant to say. Although the case keeps the iPad firmly in place, it seems just a little flimsy. There is a fine line between ultra-thin and too thin. The Logitech Solar Folio stays in the ultra-thin zone, but only barely. If you flip the ipad back to expose the underside of the case, you’ll notice that the glue separates where the cover and the iPad holder meet. In fact, the iPad holder seems like it is always on the verge of pulling away from the rest of the case. 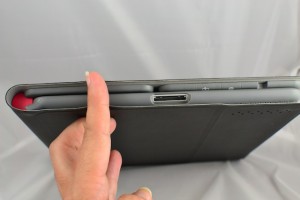 As a protective case for your iPad, the Solar Keyboard Folio may seem insubstantial , but it will stand up to normal use. Because the iPad holder easily pulls away from the cases cover, exposing the glue, it may not be fit for over-exertion. However, I crammed it into my bag, carried it around at work, set it up, laid it flat, put it on my lap, and used it under normal conditions for about a month and everything stayed put. 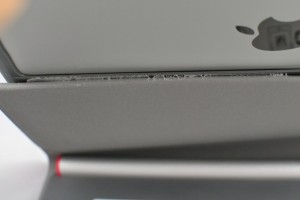 As a keyboard, the Logitech case comes as close to the real thing as possible. The keys tap smoothly with the familiar tick of an Apple keyboard. They are just a little too close together, but they don’t feel like they are crowding the space. I was able to touch-type (that is, typing on the keyboard without looking) fairly easily and only made a few errors because of the smaller size. As a solar powered device, the battery works excellently. I haven’t had the case for two years, but I have been able to use it regularly for about a month, mostly in low light and sometimes in pure dark, without ever losing keyboard power. 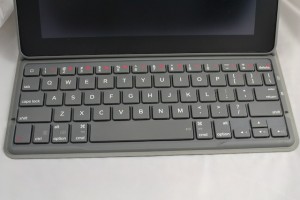 If you are looking for a keyboard case for your iPad, but worry about the added weight and bulk, you’re not going to get any thinner or lighter than the Logitech Solar Folio. It weighs only 460 grams and is about an inch thick when folded closed, including with the iPad inside. This useful case costs $129.99 and can be purchased from the company’s website today.
Nothing found :(
Try something else