You are using an outdated browser. Please upgrade your browser to improve your experience.
by Bryan M. Wolfe
September 15, 2012
In January 2007, Cingular Wireless announced plans to change their name to AT&T Mobility, bringing back into prominence a name that had been around since 1885. That same month, Apple announced the planned release of the first iPhone. When the handset arrived that June, AT&T became the exclusive carrier for the device in the United States, a distinction that continued for nearly four years. In the interim, as Apple reinvented the smartphone market, AT&T raked in the dollars. Then something strange happened: The carrier began biting the hand that fed them.

After being on friendly terms with Apple, AT&T's focus seemed to switch. First, AT&T initially said no to Apple’s new hotspot feature, which came with iOS 4. When they finally did allow it, AT&T began charging customers an extra fee. Plus, by adding hotspot, customers were told that they would have to give up their unlimited data plans, which were eliminated for new customers in 2010. To date, AT&T still doesn’t support hotspot on an iPad. Verizon Wireless, the nation’s largest cellular provider, however, does offer this feature and always has. Next, the Dallas company decided to stop offering limited (and less expensive) SMS text packages. Instead, AT&T began offering only SMS as an unlimited plan for a flat fee of $20. The reason? Apple introduced iMessage with iOS 5, which gave Apple customers free texting between iOS and Mac devices. AT&T made sure that they continued to make money despite Cupertino’s new product. They did this by raising prices and hurting iPhone customers. The last strange move arose when AT&T announced plans to charge for FaceTime over cellular, a service which is set to arrive next week with iOS 6. To get this new feature, AT&T customers must subscribe to one of the company’s newly created shared data plans, which are more expensive for some customers. As an added whack to customers, this means those with the previously mentioned unlimited data plans will have to switch to gain the FaceTime feature. The reason that AT&T has decided to charge extra for FaceTime is that they are convinced that the feature is an add-on. Because of this, they  have decided that they have the right to restrict use. Meanwhile, Verizon (and Sprint) has announced that they will offer the video-calling program on any data plan, and not for an added fee.

Verizon has always had a far superior voice network compared to AT&T. In fact, Verizon's 4G network covers 75 percent of the company's 375 markets, which is slightly more than what AT&T has to offer. Couple this with AT&T’s strange moves in recent years, and we may finally see Verizon become the preferred carrier for iPhone buyers. And if this happens, it would be the first time Verizon came out on top since they first received the iPhone 4 in February 2011. As a long-time AT&T customer, I’ve become increasingly annoyed at the company that I once respected. Not only do I believe the company’s latest moves are anti-consumer, but strangely they seem anti-Apple. And on this, I’m scratching my head. After all, if it hadn’t been for Apple, AT&T almost certainly wouldn’t have been as profitable as they’ve been in recent years. The best thing for AT&T might be for customers to abandon them in droves, especially as the iPhone 5 begins hitting stores next week. By doing so, the company may finally realize just how stupid they have become and shift accordingly. 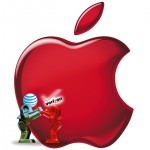 AT&T Could Face Mass Exodus Of iPhone Customers
Nothing found :(
Try something else