You are using an outdated browser. Please upgrade your browser to improve your experience.
by Joe White
September 8, 2012
Changing the brightness level on an iPhone can be something of a chore. Navigating over to the Settings app, and adjusting the levels via that cursed slider bar (which simply isn't accurate enough for me) just isn't a great means of adjusting an iPhone handset's all-important brightness. Fortunately, one new jailbreak tweak makes it possible for users to alter their brightness level using the volume buttons. The jailbreak tweak, called BrightnessIcon, adds a new icon to the Home screen after it's been installed. Touching this icon makes it possible to toggle the iPhone's brightness level via its volume keys. Obviously, touching the "volume up" button nudges the handset's brightness up one level, while the "volume down" button has the opposite effect. After you've finished adjusting the brightness thus, touching the BrightnessIcon icon again will then disable the brightness-toggle mode, meaning the volume keys return to their original nature. All in all, BrightnessIcon is a handy tweak, and will be appreciated by those who don't want to mess around with the likes of SBSettings (which, admittedly, can achieve a similar effect). Below, we've included Dom's walkthrough video which shows BrightnessIcon in action. You can download the jailbreak tweak in the Cydia Store for free (via the BigBoss repository). 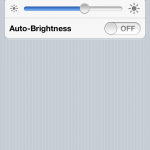 Change Brightness Using Volume Buttons With This Jailbreak Tweak
Nothing found :(
Try something else