You are using an outdated browser. Please upgrade your browser to improve your experience.
by Andy Faust III
September 20, 2012
With record-shattering pre-sales figures and the first round of iPhone 5 reviews starting to trickle in, it's glaringly obvious that Apple has another critical and commercial hit on their hands. But until I get my hands one, I'll continue to have my doubts. Don't get me wrong: For the materials, the build quality, and Apple's attention to detail on the production side, I applaud the iPhone 5. It is, in nearly every regard, a breathtaking device. Except, I fear, for where it counts most. That screen is a joke. Mind you, I'm not talking about the technology behind the new and improved Retina panel -- that's all cool, cutting-edge stuff. It's thinner and lighter and brighter and better and generally the bee's knees. To say it's not the best mobile display in the business would be quite the stretch. That said, it's the iPhone's stretch I'm so hung up on. By extending the display's height without increasing its width, Apple has largely pulled the rug out from under its own trumpeted claims of bigger being better. In truth, this one-directional increase is merely a one-dimensional alteration, both literally and figuratively. It is, to put it bluntly, a cynical selling point and little more. Yes, it's bigger, but only for the sake of bigger, for the sake of facing down Android's (often out-of-control) growth spurts and saying, "Me too." That was never Apple's style. That's also not to say the screen itself shouldn't have seen a size increase -- it arguably should have. But Apple would've done well to maintain the iPhone's existing aspect ratio in making the change. A four-inch screen of this sort would have been physically, aesthetically, and functionally larger. It would've been big, and it would have been big. The iPhone 5's screen, as we already know, sports a four-inch diagonal. Using the Retina display's 326 PPI, we can calculate that the 640-pixel base of the screen is 1.96 inches and the 1136-pixel height is 3.48 inches. This comes out to an active surface area of roughly 6.82 square inches. Now consider what could have been had Apple kept the original 3:2 aspect ratio intact. That iPhone would've also had a four-inch diagonal, but its width and height would've been 2.22 inches (724 pixels) and 3.33 inches (1086 pixels), respectively. And that means that its active surface area would've been approximately 7.39 square inches, or 0.57 square inches larger than the display in the actual iPhone 5. Yep, a four-incher with the same aspect ratio as all iPhones prior would've been 8.4 percent more screen than what Apple just gave us -- and a whopping 26.4 percent larger than the previous iPhone standard. If you're having trouble visualizing the data, here's what all that actually looks like: Instead of true expansion, though, Apple chose to go big in the cheapest possible way, and the result is a screen with a smaller surface area, identically-cramped multitouch parameters, and hardly any true increase in perceived content spread over everything that's come before. An extra row of icons on the Home screen? Awesome! The same font sizes, horizontal app layouts, and lateral confinement? Not so much. Worse, Apple's selling this size as if it were the culmination of some longtime trial that pegs it as perfection for one-handed operation. That's just not true. For years, the 3.5-inch iPhone screen was hailed as the be-all end-all for single-thumb action. Apple spent the better part of the early 2000s tweaking and testing various designs before coming up with that specific size and ratio. Chances are you've seen this image before: It makes a lot of sense. Apple's new version of the shot, on the other hand, doesn't. Worse, it is intentionally misleading: There's an awful lot of black space up there, especially when you consider how much farther down a real user holds their handset. If Apple so desperately needed to make the iPhone screen bigger, a 4-inch 3:2 screen would've allowed for maintained or improved one-handed interaction on all fronts. The top corners wouldn't be so far away, the central width of the phone would remain well within reach (as both images sell that cutoff a little too short), and content would be truly expanded instead of tritely extended. Indeed, I'm left with the same question -- and the same conclusions -- as Daring Fireball's John Gruber:

[I]f a 4-inch 16:9 display is better than a 3.5-inch 3:2 display, why hasn’t the iPhone been using 4-inch 16:9 displays from the start? Cost must have been a factor. Bigger screens are more expensive, and the 2007 iPhone display was like nothing else on the market. Bigger displays also consume more power. But I think it’s really mostly about a subtle change in priorities, a reordering of the tradeoffs — and, let’s face it, a response to marketing pressure from the aforementioned bigger-seems-better retail showroom factor.

He's right, of course. And there's maybe even a little more at play here, too. See, when it comes to Apple and its traditional design evolutions, there's always the bigger picture looming. Whether for its audience or itself (and my view skews heavily towards the latter), there's probably a compelling reason -- or several compelling reasons -- why Apple chose to go with the iPhone 5's taller display. While I firmly doubt Cupertino thinks the iPhone's new screen size is actually some categorical ideal, I can't so readily dismiss the sense it might make on the production and development ends of Apple's business. On the production side, it is markedly cheaper to produce Apple's new panel than it would've been to enlarge their traditional 3:2 display. As noted above, such a screen would've been over a half-inch larger in terms of actual pixels, and that adds up to quite the cost when you consider the sheer amount of units -- iPhone and iPod touch alike -- that Apple is projected to move. I haven't got the numbers to back it up, but it's not hard to imagine Apple saving several hundred million dollars over the next few years from this single decision alone. To keep retail costs and profit margins in line with historical iPhone releases, this taller-only move may have been absolutely necessary in the short term. Concerning the development community's perspective, I asked our own head of software to compare ease of adjustment between Apple's screen and the discussed hypothetical. His answer was surprising. In a nutshell, he said that while any display change represents a definite challenge for app makers, changing an app's aspect ratio can sometimes prove less troublesome than simply making a given app larger. In this particular case, that's because there's no automated way to properly rescale existing apps to fit a four-inch 3:2 screen. Since one-to-one pixel mapping can't be maintained without a far more dramatic increase in overall display size or a far higher production PPI than current LCD or OLED technology can handle, the result would be a poor, blurry, skewed sort of fit. At least this way the screen gets bigger, but devs aren't forced to change everything all at once. Plus, lots of existing apps already account for dynamic vertical display shifts -- just picture a full-screen app sliding down during a phone call and you'll understand what I mean. For the consumer, the new iPhone's display size really has just one redeeming quality: Single-handed typing will remain the same as before. Depending on your established proficiency jotting notes with just one thumb, that might make things a little easier. Muscle memory and all that. However, a four-inch screen as I've described above would only be a quarter-inch wider than the iPhone 5's display, and I doubt most folks would have serious issues adjusting accordingly. A slightly wider keyboard? That just means fewer typos. You know, it strikes me that, had Apple not been so ambitious in marketing its non-scientific, 300-pixel Retina "minimum" during 2010's iPhone 4 launch, the company could've simply released a 4-inch handset with a 3:2 aspect ratio at 288 PPI. Existing apps would've been translated with full-screen perfection, developers wouldn't have to code for two differently-sized iPhone displays, and we'd still have trouble making out individual pixels with the naked eye. After all, the iPad 3 only offers 264 PPI, and that looks plenty sharp enough. In many ways, the iPhone 5's odd proportions are a product of that original Retina marketing -- an unforeseen development that has Apple more backing into a corner than thinking outside the box. Before the iPhone 4S came out last year, I was convinced Apple's first display increase would be its last. The point of diminishing returns is fairly well dialed-in when it comes to mobile screen size, and four inches is definitely pushing it. Now, though, it feels like the iPhone 5 is something of a stopgap, allowing Apple to tout a larger display without settling on a truly final design. Make no mistake: Apple will change the iPhone's screen size again. Apple says, "It's not just bigger. It's just right." For now. 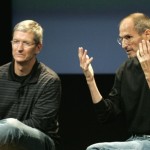 Op-Ed: iPhone 5 Or iPhone Why?

Op-Ed: iPhone 5 Or iPhone Why?
Nothing found :(
Try something else