You are using an outdated browser. Please upgrade your browser to improve your experience.
by Bryan M. Wolfe
September 10, 2012
Samsung Electronics has announced that they will sue Apple in Europe and in the United States over LTE technology. The decision, which was first reported by Patently Apple, looks to continue the worldwide feud between the two companies. According to a Samsung representative,

The Korea's tech giant's move came immediately after industry sources confirmed Monday that the U.S. technology giant will unveil the iPhone 5 featuring 4G LTE. SK said that it has agreed with Apple to release the LTE-enabled iPhone on the local market for domestic telecommunications frequencies.

Strangely, this news comes after Apple has acquired 434 LTE-based patents, mainly from Nortel and Freescale. Nortel was a leader in developing LTE. Last week, we reported that Samsung was no longer Apple's largest components provider for the iPhone and iPad. In August, a California jury found Samsung guilty of using many of Apple’s patents without their permission. Source: Patently Apple 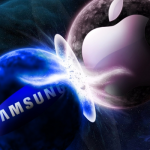 Samsung Will Sue Apple Over LTE

Samsung Will Sue Apple Over LTE
Nothing found :(
Try something else