You are using an outdated browser. Please upgrade your browser to improve your experience.
by Bryan M. Wolfe
October 12, 2012
I’ve been writing about Apple and their products at AppAdvice for over three years. During that time, I’ve gotten used to the drill. In the spring, Apple releases a new iPad, and in the summer (now fall), a new iPhone arrives. When I’m not reporting on Apple’s latest product launches, I am discussing the many rumors, some which turn out to be incorrect. This year, besides the strangely named new iPad and iPhone 5, another possible Apple product has attracted much attention -- not just here, but throughout the media. Of course, I’m talking about the “iPad Mini,” a product that was first rumored towards of the end of 2011. For the last year, I’ve heard quite a lot about this almost mythical compact tablet, even though Apple has never mentioned it, by name, design or otherwise. So what have we heard about the iPad Mini in 2012? Quite a lot, as this infographic from Gimmitech shows (click on it to make it larger):

As you can see, much has been discussed about the iPad Mini, including many rumors that have since been revised, including the device's possible launch date. Since this infographic was originally published, AllThingsD reported that the iPad Mini launch event could be held on Oct. 23, and not Oct. 17. Of course ... this, like so many before it, is ONLY A RUMOR! For more information, you may also like The iPad Mini And Its Likely Competitors: Prices And Specs That May Work. 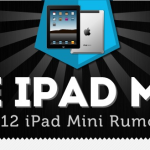 All Of The Wacky 'iPad Mini' Rumors In One Fantastic Place

All Of The Wacky 'iPad Mini' Rumors In One Fantastic Place
Nothing found :(
Try something else