You are using an outdated browser. Please upgrade your browser to improve your experience.
by Bryan M. Wolfe
October 16, 2012
One of the more interesting things of note about Apple’s invitation to their Oct. 23 special event is where it will take place. Instead of San Francisco’s Yerba Buena Center, or the Cupertino campus, Apple chose to launch the possible "iPad Mini" at San Jose’s California Theatre. This historic location was last used for an Apple event in 2005. Opened in 1927, the 1,100-seat hall was largely silent until a $75 million restoration in 2004. Today it is home to the Opera San Jose and Symphony Silicon Valley. It also plays host annually to the Cinequest Film Festival held each winter. Since that time, Apple has used the small facility on a number of occasions for product launches. In 2004, Apple introduce both the iPod Photo and special edition U2 iPod in San Jose. The following year, Apple used the venue to launch the video iPod. The reason Apple chose the California Theatre this time around isn’t immediately clear. It could be that the company simply wanted a change of venue so close to the iPhone 5 event, which was held just weeks ago in San Francisco. Perhaps they wanted a more intimate location and/or a larger stage, both of which the venue can provide. It is also possible that the historic California Theatre was chosen because of its history of being a place where Apple launched entertainment products, like the iPod Photo and video iPod. If that is the case, choosing the location could tell us quite a bit about how Apple plans to market the device, and to what type of buyer. Regardless of the reason, San Jose will play host next week and AppAdvice will be there! As a reminder, Apple’s special event begins on Tuesday, Oct. 23 at 1 p.m. EDT. For more on the history of the California Theatre, click here. For more about the possible iPad Mini launch, see Ba-Da-Bing! Apple Announces What Will Likely Be The 'iPad Mini' Launch Event and If Not 'iPad Mini,' What Should Apple Call Their Possible Compact Tablet? 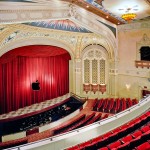 Apple And The California Theatre Have A Musical History Together

Apple And The California Theatre Have A Musical History Together
Nothing found :(
Try something else