You are using an outdated browser. Please upgrade your browser to improve your experience.
by Bryan M. Wolfe
October 5, 2012
The front page of Apple’s iPod Web page tells an interesting story. For the first time, the iPod shuffle, iPod nano, and iPod touch are each available in multiple colors. Should Apple do the same with the iPad Mini? The answer depends on who Apple expects to be buying the long-rumored tablet. There has been quite of bit of friendly discussion here at AppAdvice in recent weeks on who would actually buy an iPad Mini given the “leaked” specifications. Many of us are already iPad owners and this, in my view, has skewed many of our opinions including my own. Personally, I wouldn’t buy a mobile device without at least 32GB of storage space and a Retina display. However, we will probably get neither when Apple launches the 7.85-inch tablet. This doesn’t mean an iPad Mini won’t find its way into my home. In this case, however, it will be for my daughter. When Apple releases the first iPad Mini ads, I’m pretty sure that the company will target three primary groups of would-be buyers. These would include first-time tablet owners, families with children, and frequent book readers. Because I expect the iPad Mini to be much more consumer-focused than the iPad, I wouldn’t be at all surprised were Apple to release it in multiple colors. In fact, I think it would be a great idea both from a marketing standpoint and as a way for Apple to differentiate the iPad Mini from what competitors are already offering. Supply constraints, however, could make this impossible, at least this year when demand for the iPad Mini will almost certainly exceed supply, at least in the beginning. Most likely, the iPad Mini will launch in black and white with other colors possible in 2013 and beyond. Still, I know one 5-year-old girl who would stand in line for a pink tablet. Oh well, there will be plenty of cases. As a reminder, Apple could announce the iPad Mini at a press event on Oct. 17. We'll keep you updated. For further reading, check out Getting Your Hands On An iPad Mini Might Prove Difficult and WSJ: New iPad Mini In Production Without A Retina Display, But For Good Reason. Photo: Apple's (PRODUCT) Red devices 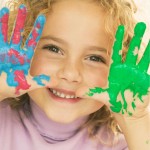 Color Me Crazy, But Maybe Apple Should Launch Multiple iPad Minis
Nothing found :(
Try something else